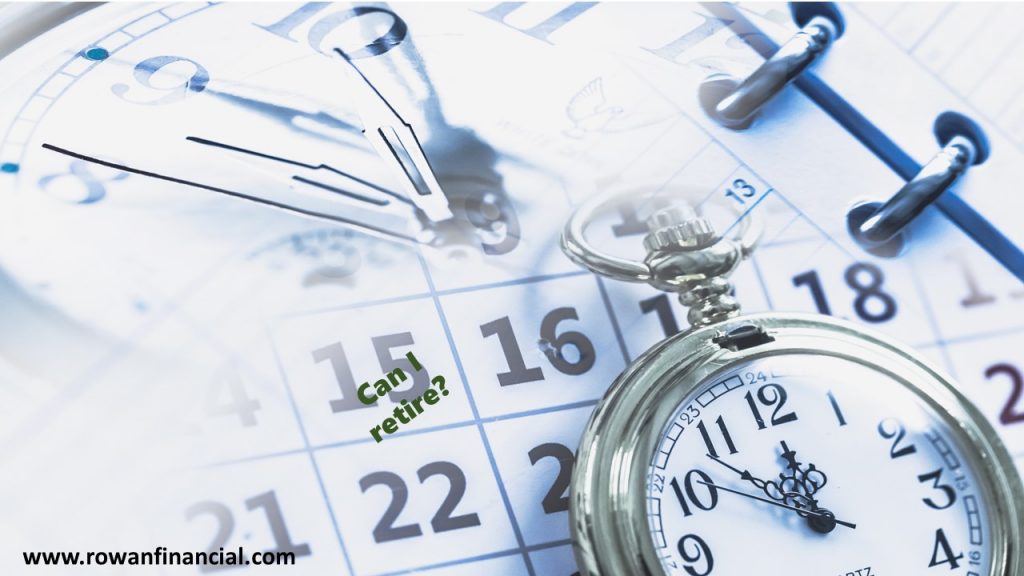 Simple to Ask / Complex to Answer

You are nearing retirement age and may be beginning to ask yourself, “Can I retire yet?”  This simple question is one of the most difficult to answer because it relies on many variables as well as the spending and saving choices you make leading up to and once in your retirement years.

Taking it to the Next Level

In a previous post, I provided you with a quick and dirty method based on the 4 percent rule to assess whether you are financially ready to retire.

However, like all rules of thumb, simplifying assumptions are needed for them to be easy to use.  The 4 percent rule is based on retirees always defaulting to a 4% withdrawal of their assets to fund their retirement that is completely disconnected from their actual spending patterns and what’s going on in the financial markets.

So while I love the 4 percent rule as a starting point in your planning process, a next layer of analysis is needed to help you answer, “How soon can I retire?”

How Much Will I Actually Spend in Retirement

David Blanchett, CFA, CFP® is the head of retirement research at Morningstar.  In 2013, he published an important study entitled, “Estimating the True Cost of Retirement.”  One of the big conclusions from the study is that retirees spend more early in their early retirement years and less in their later years.

Whether you know people who have been retired for a while now or think about it for yourself, this makes sense, right?  You’re much more likely to do things like travel more, pursue more expensive hobbies,  go out to eat more or spend money on your grandkids in your mid 60’s than you are in your mid 80’s.

Mr. Blanchett found that in inflation-adjusted dollars, retirees spend an average of 20% less in retirement by the age of 85 than they did at age 65.

So What’s This Mean for My Retirement Plan?

If you’ve worked with a financial advisor to develop your retirement plan, you may want to revisit the spending assumptions that were used.  Based on the above-referenced Morningstar research, you may be able to:

What if I Haven’t Done a Retirement Plan Yet?

If you haven’t done a  retirement plan yet, that’s fine.  First start with the 4 percent rule method that I linked to above.  If you’re in the ballpark of being able to retire, but want to do a more detailed assessment, reach out to your financial advisor and ask for help.

If it makes sense to you based on what you have planned for retirement, ask your advisor to gradually reduce your spending (in inflation-adjusted dollars) from the start of your retirement through age 85 as suggested by Mr. Blanchett’s research.

In addition to gradually ramping down spending for my clients, I like to run at least 3 Scenarios with the following assumptions:

Scenario #1 – The Bulletproof Retirement (if Nothing Goes Well)

Scenario #2 – The Most Likely Retirement

Scenario #3 – The “Everything is Beautiful” Retirement

If you have enough financial reserves to weather Scenario #1, you can plan to:

If your cash reserves won’t cover Scenario #1, but will last through Scenario #2, you can think about:

And if you need an “Everything is Beautiful” scenario to play out for your retirement math to work, I’d recommend staying employed for a few more years to shore up your finances and be able to retire with dignity.

Work with a qualified financial advisor on your retirement plan.  Adding in an assumption to gradually ramp down spending may significantly brighten  your retirement outlook and have you packing up the RV sooner than you’d planned!

Posted in Retirement Planning and tagged am I on track for retirement, Encore Career, Retirement planning
Schedule a Free Consultation